The Gallery will be closed 12 SEPTEMBER and reopen 10 OCTOBER.

Jenni & Mervyn are heading off to Tibooburra to paint.

We are saddened to acknowledge the passing of our gallery artist, friend and colleague PIERS BATEMEN. Piers has been in both Mervyn and my life forever. The Bateman family lived nearby when I was growing up in Eltham and came regularly to our Pastry shop. Piers was always the artist and when I began painting he made my first picture frames. He attended our local Eltham High School and contributed significantly to the artistic ethos of our community. Piers had the opportunity to work with and be mentored by  some of our country’s greatest artists’ such as Arthur Boyd.  We were excited for him when he had his first successful exhibitions and how proud he stood with those first achievements.  He went on to have a highly successful career as an artist in Australia and overseas. He had a passion for the sea and travelling extensively making a home where ever he was and in particular Spain and more recently China. He began teaching painting as a Professor for the Shanghai Institute of Visual Art.

Piers was an adventurer and great inspiration for just heading out there and doing it!  We saw the Australian Desert through Piers’s paintings, our local Bush and later the works from China more recently. He made his mark as a strong and unique Australian Landscape artist and did not ever ‘sell out’ to the fashion of the day with his art.

Piers has been showing at Eltham South Fine Art: Studios and Gallery since we commence and will be greatly missed for those regular chats and coffee around the table. 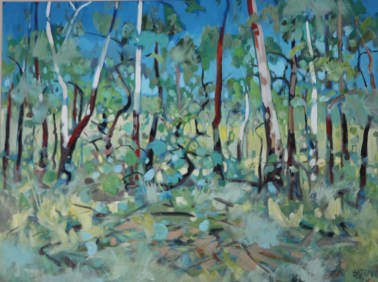 Born in Perth Piers moved to Eltham with his family in 1957 where he spent his formative years and attended the local Eltham high school. In 1966 Piers travelled to London where he studied art with Arthur Boyd and shared studios with Canadian and English painters. He held his first exhibition in Melbourne at the Munster Arms Gallery in 1968 age 20. From thereon he has travelled and exhibited regularly in Australia and overseas as well as setting up a studio in Alicante Spain in 1985. He has work held in many Private and Public collections nationally and internationally including Shanghai; where he currently holds a position at the Shanghai Institute of Visual Arts.

From the Sydney Morning Herald

Former Liberal Andrew Peacock, has paid tribute to his “dear friend” landscape artist Piers Bateman, who died in a boating accident on Friday.

Mr Bateman, 67, was accompanied by a friend from New South Wales, who also perished in the incident.

In an email to Fairfax Media from his home in Texas, US, Mr Peacock said he was “very sad” to learn of the death.

“Piers was a dear friend and I greatly admire his work,” he said.

“Six of his works hung in the Australian Ambassador’s Residence in Washington,DC while I was there and I have five of them hanging in my Texas home today.”

Mr Peacock said so much of the Melbourne artist’s work evoked a distinctive Australian spirit.

“Piers was a fine artist and I will miss both him and his work,” he said.

Mr Bateman’s   work has been exhibited in art galleries in Australia and abroard, including the Red Hill Gallery in Brisbane, Eltham South Fine Art and the Shanghai Contemporary Art Fair.
His art also hangs on the walls of the Reserve Bank of Australia, Melbourne University and the conference room in the Australian Embassy in Washington.

In 2008, Mr Bateman told Brisbane Times art was a “seduction” to be enjoyed.

“I present my paintings to you to be regarded as modern work within an art tradition rather than traditional art which has become a term connected to conservatism as opposed to modernism,” he said.

“Art is seduction, and as such is to be enjoyed!”

According to reports in the Newcastle Herald,  Mr Bateman and his friend left Broken Bay, about 50 kilometres north of Sydney, at 2pm on Thursday.

The pair were on their way to North Arm Cove in the Hunter and Mid North Coast region.

Fairfax Media understands the two were in constant contact with their families as they moved up the coast on the 88.28-nautical-mile (163.5 kilometres) journey.

Relatives last heard from them late on Thursday. Their bodies were found on a remote section of Stockton Beach on Friday afternoon.

It is understood their planned arrival time at North Arm Cove was about midday on Friday.

When relatives could not raise them, they reported their concerns to authorities.

It is understood their mobile phones went dead about 3.30am.

When they didn’t arrive, a full-scale search was organised along the sometimes treacherous waters of Stockton Beach.

The combined resources of water police, helicopters and surf lifesavers failed to find any trace of the men or

their eight-metre yacht by Friday afternoon. Then, one of the men’s bodies was discovered by officers “on waters close to the shore”, near the renowned Tin City, about 3.30pm.

A sweep of the beach found the body of the second man 20 minutes later, at the tide mark about 500 metres south of his companion.

Officers from police rescue had the grim task of driving six kilometres down the remote beach and photographing and retrieving the bodies from where they lay in the damp sand.

It was still unclear whether a dinghy and fuel tank also found on Stockton Beach, but some distance from the men, were linked to the tragedy.

That there was no mayday call to authorities has baffled investigators. It could suggest the men had no time to call for help.

One theory is the men may have fallen asleep only to wake and find themselves in severe danger before jumping overboard.

Only one of the men had any noticeable injuries – a few marks to his head – but whether that points to their fate may not be known until an autopsy is performed.

Searchers had also not found any trace of their vessel or any debris if it had indeed struck trouble.

A relative of one of the men was travelling from the Hawkesbury area in NSW on Friday night to formally identify him.

Auguste Blackman, who is the son of prominent artist Charles Blackman, said he was shocked to hear the news on Facebook about the death of his idol.

“I thought it was a joke,” Mr Blackman said.

“These guys are indestructible …they are not allowed to die.”

Mr Blackman said growing up, the landscape painter had been a big part of the family.

“Piers changed my life,” he said.

“He has been a very close friend of the family since I was a teenager.

“My father championed Piers’ early career as a painter”

Mr Blackman said the artist was also an adventurer.

“Some people go tiptoeing to the grave and some people go with a great big scream and shout and hurrah,” he said.

“Any adventure you name, he would have done it. He went through all the canals of Europe in the boat.

“He just wanted one last adventure.”

Police are preparing a report for the coroner. 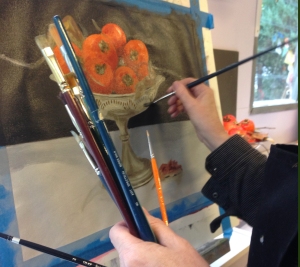 Twenty-one students working with Jenni Mitchell & Mervyn Hannan will be exhibiting work in the Gallery during late August into Early September. New students together with long time students who have been working with Jenni for over eight years will be showing a selection of works that include studio and plein air oil, pastel, acrylic, watercolour, gouache and prints. Many of the works will be for sale. 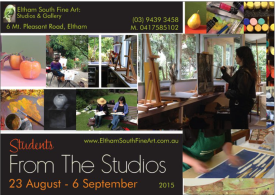 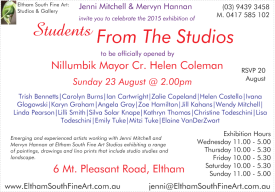 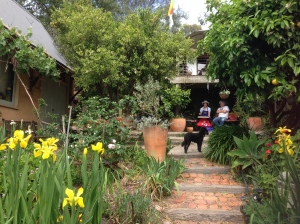